On an unseasonably mild summer, August day, we headed east to the coastal plains (tidewater) region of Virginia. With the predicted forecast of highs of 82F with some overcast, we knew this was the perfect time to further explore the beautiful blueways in gloucester county. We had previously completed two of the blueways (Warehouse Landing & John’s Point) and decided to take on our third – Tanyard Landing Trail in Gloucester, Virginia.

Located just an hour away from richmond, this trail follows the gentle poropotank river, a small tributary of the York River. As a blueway, this trail is designed for non-motorized boats, such as canoes and kayaks. It is a great place to experience a small piece of the huge Chesapeake Bay ecosystem. The wildlife is abundant, with blue herons, bald eagles, kingfishers, crabs, and even dolphins have been spotted in the poropotank river. It was a perfect day to flow through the arteries that make up the Chesapeake Bay. The occasional clouds, helped shade us from the summer sun and welcoming breeze, flowed through us. The air was fresh, with just a hint of salt. The bay grasses were healthy and plentiful. These are the buffer zones that are so important in keeping the bay clean. We meandered down the peaceful river in complete silence. The occasional fish would jump from the water, but otherwise, the only other sound was the wind through the grasses.

When you first arrive at the Tanyard Landing Boat Ramp,  you will have the option of either going west down the trail or east to explore the river upstream. We actually did not stay on the trail, but headed east to explore the inner wetland areas. We spotted one other group kayaking but no one else was on the water. After the day of paddling, we headed to the nearby Gloucester village, a peaceful and quiet town with a population of 2951. The busiest section of town is the main street  where most of the shops and restaurants are located. We returned to Olivia’s, our favorite restaurant in town, for crab cakes. For anyone looking for the complete, Virginia tidewater region experience: find a canoe/kayak, pick a blueway to explore, and then stop for food in Gloucester village. It’s what summer is Virginia is all about.

“There is but one entrance by sea into this country, and that is at the mouth of a very goodly bay, 18 or 20 miles broad. The cape on the south is called Cape Henry, in honor of our most noble Prince. The land, white hilly sands like unto the Downs, and all along the shores rest plety of pines and firs … Within is a country that may have the prerogative over the most pleasant places known, for large and pleasant navigable rivers, heaven and earth never agreed better to frame a place for man’s habitation.” – Captain John Smith (regarding his exploration of the Chesapeake Bay in 1608)

In one of his most well-known passages describing the Chesapeake bay, Captain John Smith’s words still resonate today. This is the largest estuary in the United States and home to an incredible ecosystem. There is no question that the a healthy bay benefits everyone, from a environmental and wildlife standpoint and of course economically. Unfortunately, not everyone shares this sentiment. The future of the bay is uncertain as a proposed budget, by President Trump would eliminate federal funding for the continuing cleanup of the Chesapeake Bay. The Environmental Protection Agency budget  for the Chesapeake cleanup was $73 million. With the new bill proposed, this amount would be $0. Organizations like The Chesapeake Bay Foundation have been fighting the battle to restore the bay for many years. Click here to sign a petition to urge congress to preserve funding for the bay: http://takeaction.cbf.org 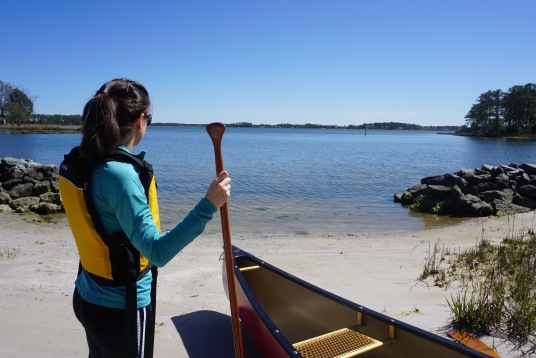 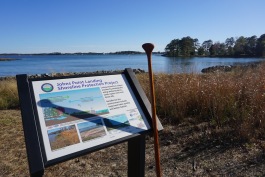 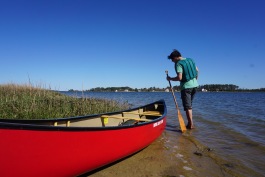 I used this golden spring weekend, to pull out the canoe from the basement and explore another part of the Chesapeake Bay and the Gloucester Blueways, this time, to John’s Point. We paddled the Ware River last year, but wanted to explore another of the 5 total blueways that exist in Gloucester County. John’s Point is very similar to Warehouse landing, the boat launch is very well kept with a nice clean beach as your launch site. It was a windy day, and the proposed trail totaled 8.8 miles along the Severn River toward Mobjack Bay and back was formidable. This might have been possible in a kayak, but we opted to head west instead of east to explore the inner waterways and the beaches in search of crabs and oysters. We took breaks from the wind as we hopped from island to island, and combed our way through the beaches. We saw several ospreys, one egret, one loon and a red tailed hawk. The water was very clear and all along the beach were oysters popping out of the sand. I came out here to feel once again how special the Chesapeake Bay is. What John Smith said about the bay in 1608, still holds today. It is truly a national treasure worth fighting to protect for future generations to come. 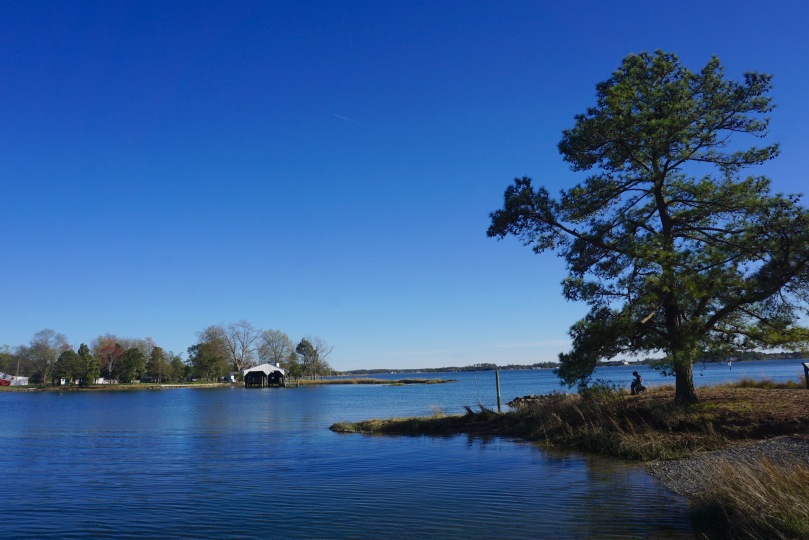 There is never a shortage of waterways to explore in Virginia. In a short 1 hour road trip from Richmond, one can reach the largest estuary in the United States; the Chesapeake Bay. Here, fresh water from over 150 rivers and streams of New York, West Virginia, Pennsylvania, Delaware, Maryland, District of Columbia and Virginia meet the Atlantic Ocean to create a brackish water ecosystem teeming with diverse wildlife and vegetation. There isn’t a better way to connect with this landscape than by canoe. We decided to paddled through the south arm of the Ware River, one of five canoe trails that make up the Gloucester Blueways. The county established these Blueways as a way to encourage visitors to the area and to encourage preservation of these precious lands.

The population of bald eagles and osprey has been healthy in recent years and we had were within sight of them the second we reached the put in. The salty waters of the Mobjack bay was surprisingly clear and calm as we embarked on our excursion.

A sense of calm and stillness surrounded us as we approached the wetlands. We were protected from the wind by reeds and twists of and turns of the stream. I was stunned by the vast array of wildlife we encountered. From blue crabs, to herons and even a red-tailed hawk, each bend of the river presented a new surprise.

There is certainly something very special about the wetlands. For years the Chesapeake Bay Foundation has been fighting to protect these lands. These regions are especially important in preserving the clarity of the Chesapeake bay. It is the final stop for all of our river and stream runoff from land before it reaches the bay. The major pollutants of the bay are in the form of nitrogen and phosphorus. Such elements are crucial to life, however an overabundance can be detrimental. When these elements are in excess, they contribute to algae blooms which clouds the water and inhibits sunlight that is crucial to the growth of bay grasses. The decline in oxygen from dying plants can cause dramatic pH changes which can kill off crabs, fish and more plants. Today, 300 million pounds of polluting nitrogen reaches the bay each year, over 6 times the amount that reached the bay in the 1600s. 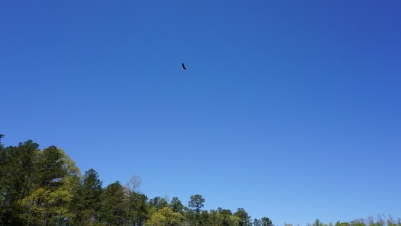 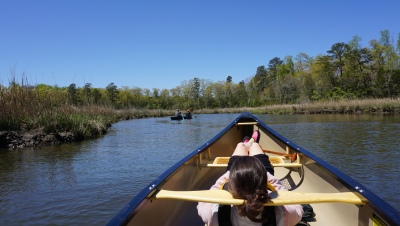 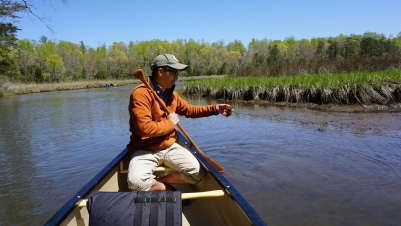 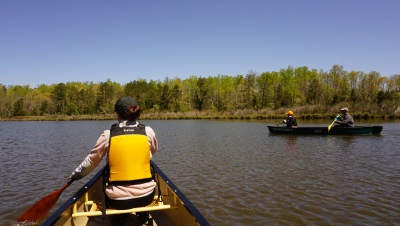 While the war effort in cleaning the bay is underway on many fronts. Many believe that the oyster will be the savior of the bay. The eastern oyster is an incredibly resilient species, although years of disease, pollution and over harvesting have caused numbers in the bay to decrease to less than 1% of what it once was. This shift in oyster population has also contributed to the decline in the health of the bay. Oysters are able to filter up to one gallon of water in one hour. They play a vital role in preserving the clarity and hence the habitat of the Chesapeake Bay. In the recent years, the news has been promising with oyster populations making a bounce back and with them, the blue crab population. Both iconic species of the Chesapeake Bay. 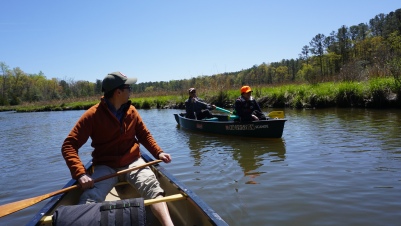 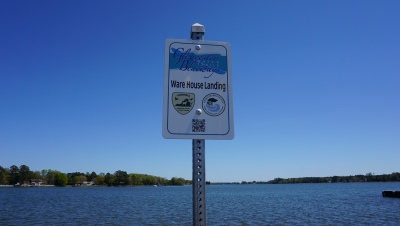 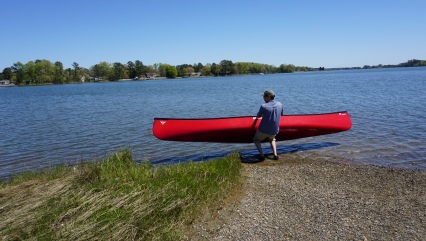 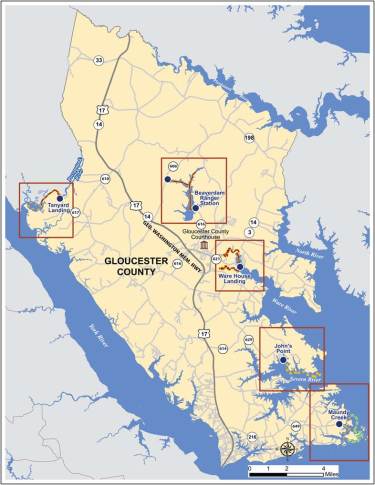 I had some time at the end of this trip to reflect on some tripping gear as well. This was my third outing on the prospector, and so far she has been handling like a dream. At only 52 lbs, she’s a breeze to load onto the car and take anywhere. She is responsive and feels comfortable on all different types of water. The comfortable yoke design also makes her almost a joy to portage…but i wouldn’t go that far. I’ve also been quite happy with the Sony a6000 mirrorless camera I’ve been shooting with. I’ve realized that I normally shooting in fairly wide angles at an average of 16mm. Although I haven’t used many other lenses other than my portrait 35mm, I can definitely see the utility in the zoom lenses >250mm in capturing wildlife. The eight bald eagle sightings on this trip convinced me to at least look into some of these lenses.

The scorching Virginia summers often steer our canoe trips to the cooler mountain lakes, however this is spring, and anything is fair game. It was actually a refreshing and chilly day as we paddled, at temperatures in the 50s F. Let’s see how long these cool temperatures last. With the north arm of the Ware River and four more routes to explore on the Gloucester Blueways, there’s still plenty to see. Long live the Chesapeake Bay.