An unseasonably cool breeze came through central Virginia and decided to stay around for the whole weekend. We were blessed with clear skies and temperatures in the mid to upper 70s. This was certainly a welcoming reprieve and sign that the last weeks of summer are upon us. It seems as if the more record-breaking hot summers we endure, the more I value such days. The morning air was actually crisp and it reminded me of the unfamiliar feeling of being chilly! We’ve gotten through the worst of it….autumn is just around the corner. The only logical thing for us to do with this beautiful day was to explore a new park! A 50 minute drive from Richmond brought us to York River State Park. The impressive York River spans 34 miles long with a width of 1 mile at it’s beginnings to 2.4 miles as it opens into the Chesapeake Bay. The river is formed by the confluence of the Pamunkey and the Mattaponi Rivers and drains a large watershed region of the coastal plains of Virginia. The York River was home to the indigenous people for thousands of years and subsequently was used heavily during both American Revolutionary and Civil Wars; it was the site of many historic battles. 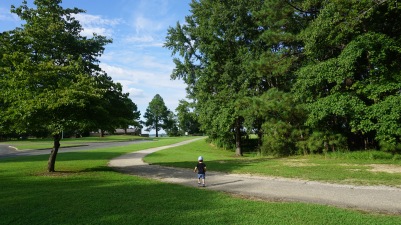 Today, York River State Park serves as a diverse and well kept recreational area for all lovers of the outdoors. It is a day-use only park and as such, it closes at dusk (during the summer is 8:00pm, the gates lock so be careful!). The park’s 2531 acres offer a plethora of activities, from canoeing and fossil hunting, to historical sites to explore. The unique location on such a large river provides a rich variety of terrain, with sweeping bluffs, open lands, marshes, and densely wooded forest. This transition zone of land to eventually ocean, provides refuge for hundreds of animal species including, bald eagles, river otters, deer, crab and countless insect species.Our boy was certainly excited to be here. He immediately took off into the large open spaces of freshly cut grass to let out a triumphant toddler yell that was loud enough to catch the attention of nearby deer. Our first stop was the nature center, where he eagerly pointed at every single animal and inquired “what’s that!? what’s that?!”. He was particularly fond of the owls and of course the rabbits. Behind the nature center is a small amphitheater that can be reserved for meetings and retreats, it overlooks the York river with a grand view over a bluff. From here, you are able to spot the large nests of the numerous osprey that hunt these grounds. 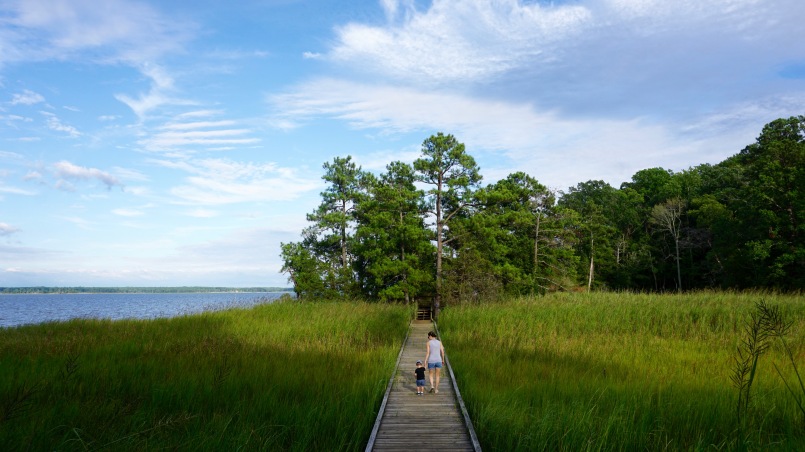 One of my favorite parts of this park has to be the lovely view overlooking a Taskinas Creek, as it winds through a dense marsh. There is a wooded stage with a mounted tower viewer binocular set to see the show that nature has in store for us. What’s even better, is the fact that you can walk down a series of staircases to get right on this tributary. A fleet of canoes is standing by, ready to be rented out and paddled along this scenic waterway. I was very impressed at how well kept the park seemed to be. The facilities and equipment seemed to be in tiptop shape. I was pleased to learn that like all Virginia State Parks, York River organizes numerous activities each week to draw visitors to the park. One of which is called “canoeing under the stars” from 8-10pm, where canoiests can paddle by moonlight along the mighty York.

We hiked a short half mile trail across boarded walkways to get to Fossil Beach. Along the way, we spotted two large white-tailed deer in the distance. Our toddler without skipping a beat, took off a full speed after them. The deer were amused at this small creature creating such a scene and decided to watch for several moments before taking off into the woods. We had the beach to ourselves as the sun was beginning to set. Our boy loved every single moment of it as he tracked down crabs, fingered through seashells and pick up colorful rocks. 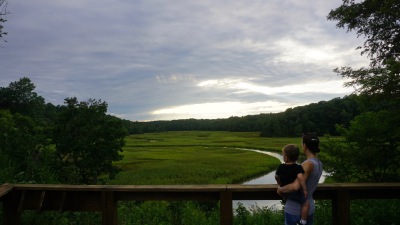 The state parks were created for all to enjoy and to instill a sense of adventure, inspiration and curiosity. By the look on my son’s face, York River State Park certainly accomplished all of those goals. We will certainly be back to paddle Taskinas Creek and to explore the many trails.

For more information, here is a link to the official website for York River State Park.